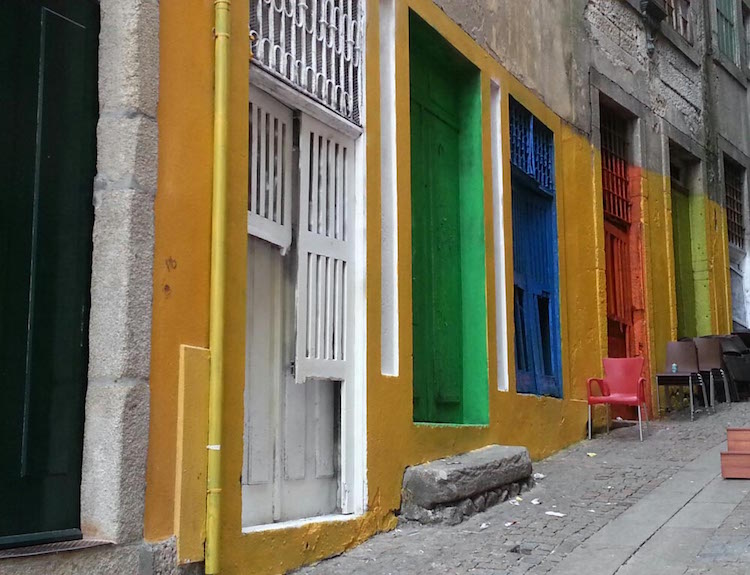 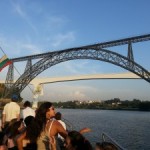 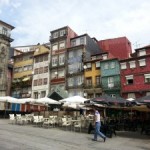 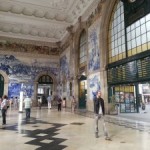 Here for a weekend break? Check out my top ten things to do in Porto.

Budget usually dictates whether you choose a hotel or a hostel, but if you’d never considered ‘roughing it’, you might think about it in Porto. Some of the hostels here are classier than a 2- or 3-star hotel. Many are housed in refurbished palaces, some even have pools and, incredibly, prices start as low as €10 per night. Try Hostelling International to start (www.hihostels.com). Those in a group or with a family should check out Airbnb (www.airbnb.com) – we found a fabulous apartment near the centre for less than €25 a night each. High-enders should check out the Sheraton where our conference was held. Can’t speak for the rooms, but they served a fine lunch…

Getting around is an important part of any trip, so knowing what transport is available and how to use it should be your first job. In Porto the options are seemingly endless – visitors can take a tram, train, taxi, water-taxi, bus, cable car, boat, bike or Shank’s pony (walk), and each will reveal the city from a different perspective. But for my money, a hop-on, hop-off sightseeing tour is a great way of getting to know and understand the scale of the city, helping you to place yourself within it – are you close to the beaches, the historical centre, the port caves or the riverside? – and then make your way around it accordingly. The old centre is wonderfully walkable, as is the port caves area, but taxis are cheap so if you do need to zip across town, jump in a cab and walk around when you get there.

With a certain low-cost airline I found that buying a sightseeing bus ticket on board (valid for 48 hours) got me a free caves tour thrown in. Port wine has been produced in the Douro valley since the 16th century and the names of some of its originators will be very familiar: Croft, Sandeman and Taylor among them. At €13 I couldn’t resist and, like many things in Porto, it was an absolute bargain. The tour included two tastings, one before and one after, and a brief 30-minute tour of the caves where the port wine is stored. Apart from the climactic conditions, I learnt that the area’s soil and drainage make it perfect for grape-growing (and 7% of the grapes are still pressed by feet so as not to crush the entire grape). On the third day of fermentation, brandy is added along with natural sugars and tannin, and in the spring the wine arrives from Douro to be stored in French oak barrels for at least two years before being bottled, so beginning a process that that might see the wine mature for twenty to thirty years. For my more immediate purposes though, I also hear that a chilled white port, or the lovely pink port perfected in 2008, will make an ideal aperitif served with soft cheese, dried fruit or olives.

Taking a tour along the river is a wonderful way of admiring the real beauty of this city. Porto is a hilly place so a trip along the river offers superb views from the riverside right up the hill, and on the ‘six bridges’ trip you’ll get a bit of background on the structural side of the city too – for instance, the reason one of the bridges reminds you a little of the Eiffel Tower is because M. Gustave Eiffel was responsible for the design of it, along with Théophile Seyrig, back in 1877.

The riverside around Ribeira is one of the most atmospheric parts of the city and full of life. Pavement cafés, bars and restaurants abound and, if there is a festival on, you may catch an impromptu capoeira performance or a street parade or even a riverboat regatta. Admire the prettily painted houses and shops above the Muro dos Cobertos da Ribeira (wall of Ribeira shelters) and walk along the riverside to the Casa do Infante (the Old Custom House), which has been beautifully restored and now hosts such events as fashion shoots and private functions.

The beautiful tiles that cover many of the houses in Porto are also used to decorate churches and even the railway station. Head up to Rua dos Clerigos and, as well as some wonderful shopping opportunities, don’t miss a visit to the San Bento railway station on Praça da Liberdade where the azulejos (painted tiles that are particular to Portugal and often depict important cultural and historical events) are magnificent.

The plaintive songs known as Portuguese fado have a history that stretches back centuries, but could be much older still. The subject matter has often been of the sea, poverty and loss, and is usually sung by a lone man or woman playing, or accompanied by, a single guitar. Though its origins lie in Lisbon and Coimbra, it is also possible to hear fado in Porto too and an opportunity to do so shouldn’t be missed.

Ancient and new sit cheek-by-jowl in Portugal and lovers of modern architecture will be thrilled by Rem Koolhaas’ clean white concrete Casa da Música that sits in the centre of the city surrounded by the slightly shabby buildings built at the turn of the last century. The juxtaposition works well as the music hall is given enough space to ‘breathe’ in this crowded city, and the use of tiles and  ‘walls’ of glass make a connection historically and visually.

Porto is a city that doesn’t really get going until late so bars are often open in the early hours of the morning and, in spite of the abundance of cheap and decent alcohol, the atmosphere is usually friendly and relaxed. Around Ribeira is a good place to start but the real nightlife happens on Rua Galeria de Paris in cool converted warehouses, cocktails bars and even old movie theatres. Don’t forget to try the local vinho verde – it’s on tap.

Anyone who’s ever tasted a pastel de nata (egg custard tart) is in for a treat here. They originated in Lisbon but are popular all over the country and they’ve been elected one of Portugal’s top gastronomical treats. They are best warm from the oven, browned on top, with slightly crumbly pastry and flavoured with cinnamon; perfect with your milky morning coffee – um galão directo (deeretoo). But there are plenty more sweet treats here, as any trip to a pasteleria (pastry shop) will prove. Try them all – but it may take you all summer.